Gearing Up to Buckle Down: How Election Results Could Affect Compliance

With election results soon to come, compliance officers around the country are bracing for a potential shake-up should a Democratic administration take the White House. While a morphing regulatory structure is always something to prepare for during election season, banks and financial firms should pay close attention to the Consumer Financial Protection Bureau (CFPB) should the Presidency change hands.

A Canary in the Compliance Coal Mine?

Current Director Kathleen Kraninger took over in 2018 and the CFPB still never topped 8 enforcement actions in a single quarter—until recently, that is. In Q3 this year, 19 different enforcement actions were taken by the CFPB, a record under the Trump Administration and the highest number since 2015. 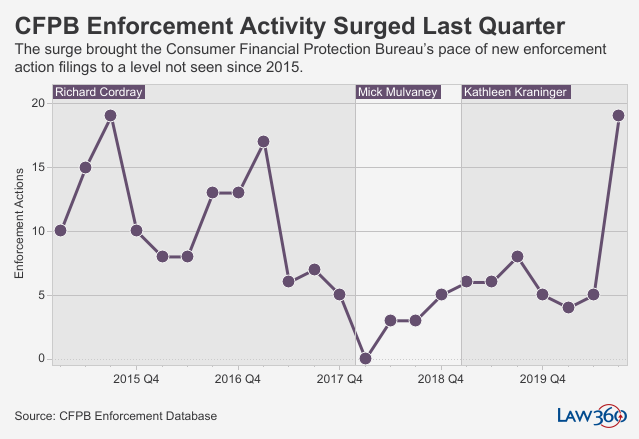 What caused this sudden uptick in action? Some analysts argue it’s just Kraninger getting comfortable in the role now that the agency’s status is no longer up for Supreme Court debate. Others point to the fact that a large portion of the actions were against mortgage companies who deceived servicemembers, which are amongst the easiest cases to move forward.

But there’s also a canary in the coal mine answer for the increased uptick—firms want to get their cases settled now before a potential Biden administration takes over.

A Return to Force Under a New Administration

Under Mulvaney and Kraninger, businesses were given more leeway to adjust to regulations before action was brought. One of the complaints about the Obama Era CFPB was that compliance violations were often slapped on businesses without the firms even knowing which rules had been broken.

However, Biden’s plan for the agency could increase the sharpness of its fangs. More fines and stricter regulations could be enacted quickly under a Democratic president, which might be why so many firms are eager to get their cases wrapped up under Kraninger. When the Supreme Court ruled that the organization was constitutional back in June, one of the sticking points was that the president was free to fire the agency’s director at any time. Insiders believe replacing Kraninger with someone more in the Elizabeth Warren-mold would be one of Biden's first moves as president. With many national polls showing Biden ahead, these businesses would rather see their issues resolved now before a stricter director takes over.

What Would A Biden Win Mean For Fintech and Banking Relationships?

In the case of a Biden win, with the expectation that Biden would move quickly to appoint a new CFPB director, compliance officers must be prepared for new rules and regulations to come quickly. While the lull in enforcement during the Mulvaney Era was expected, the uptick in enforcement actions became somewhat inevitable once the pandemic hit.

Fintech companies and banks have benefited from federal attempts to modernize certain regulations like “Valid When Made” and “True Lender” rules. States don’t like it because these federal provisions trump state laws, but lenders have been encouraged to partner with fintech firms by the current administration. Would Biden curtail these relationships? Unlikely, since reforms have been in the works dating back to the Obama administration. Non-bank lenders will almost certainly face more regulatory scrutiny under a Biden presidency, but fintech firms and banks won’t be discouraged from joining forces. And a Biden administration could increase the odds of a deal being brokered with the states before a drawn-out court battle.

A changing regulatory landscape is nothing new to compliance professionals. Compliance officers know that they don’t necessarily need to hang on the edge of their seats for election results, as long as they've been reviewing best compliance practices and maintaining an agile compliance program that's ready for any impending changes.

Stay current with the latest news and updates

GET THE 2020 CONSUMER COMPLAINTS REPORT